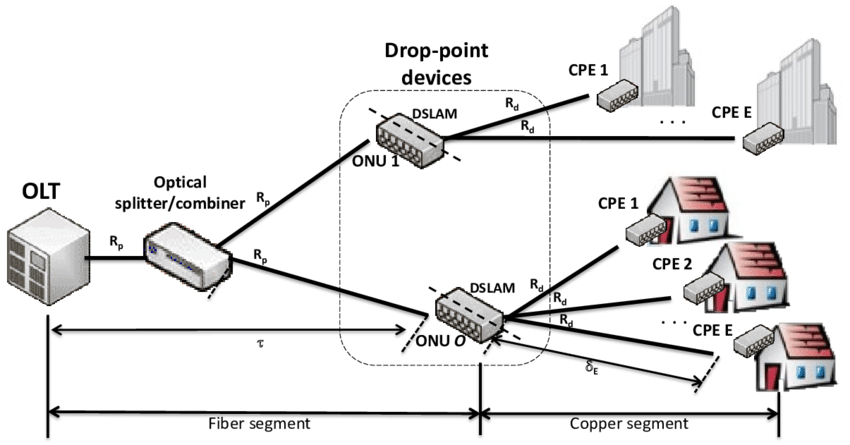 The tech world is chock-full of acronyms. Unfortunately, it can be hard to get a grip on what all those letters mean, much less remember them. A case in point is xDSL technology and its many types (e.g., ADSL,  ADSL2, ADSL2+, ADSL Lite, VDSL, VDSL2, R-ADSL, and SHDSL). This article aims to discuss just what xDSL technology is and serve as a quick guide through this swarm of acronyms and jargon.

So, let’s get started!

DSL stands for “digital subscriber line”; the “x” indicates many different DSL types. In other words, xDSL is a generic term for all kinds of DSLs.

DSL delivers a high-bandwidth internet connection from a simple telephone wire (wall jack) that is directly connected to a modem. Telephone wires carry hundreds of thousands of frequencies while only using a few thousand for actual telephone communications. Therefore, DSL has plenty of frequencies available for file-sharing, transmitting pictures and graphics, multimedia data, audio and visual conferencing, and much more. DSL extender technology can provide additional network improvement.

DSL may no longer be cutting-edge internet connection technology (fiber is); however, it is far more likely to be available near a business or a home than fiber.  And while it may not be as fast as fiber, it provides speed levels that are entirely satisfactory for most households and small businesses. For business, this can be paired with cable management planning that provides room for future growth.

DSL internet service comes in two major categories: asymmetric or symmetric. Within each of these categories, there are different “flavors” of service.

So, why so many flavors?

The short answer is that users have different needs. For example, the needs of a home user with one or two computers are not the same as those of a small business owner.

Before we discuss the DSL types individually, we want to note their key differences:

According to TechTarget, this technology:

The most common types of asymmetrical DSL are as follows:

VDSL works for up to 4,500 feet from network equipment with a top sped of around 75 Mbps closest to the equipment that decreases to about 25 Mbps at the full 4,500 feet. Beyond 4,500 feet, the VDSL signal diminishes at a steep decline.

In contrast to asymmetrical DSL, symmetrical DSL delivers equal bandwidth to both uploads and downloads. As a result, this technology works best for voice and video communication requiring high speeds in both directions. Therefore, symmetrical DSL tends to be used more often in business environments.

The most common type of symmetrical DSL is:

Not much equipment is required for DSL, and most of it is provided by your internet service provider (ISP). One thing to note: The equipment provided by your ISP is usually leased and must be returned to the provider should you terminate your contract. However, should you want to, you can purchase your own equipment. Here is what you will need:

According to Plug Things In:

The Pros and Cons of DSL

As with any technology, there are both pros and cons when it comes to DSL.

Digital subscriber line technology transforms a plain old telephone system (POTS) into a broadband communications link. DSL is fast and cheap and may just be the best technology for your home or business needs

Follow Planet Technology on Youtube to learn something new about last-mile technology, or even occasionally have a laugh.